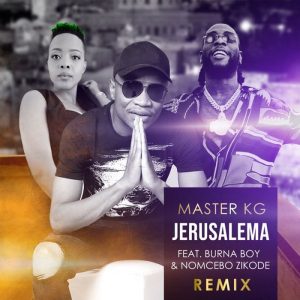 The beat is a masterpiece, one made from the prevalent Gqom, South African house genre. On this throbbing percussive beat, Burna swerves in with the coolest of vibes. You notice he’s entered the fray, but it’s just so sweet you’re not even distracted. He slips in seamlessly with no discomfort. What’s surprising is he’s singing in Zulu.

When the beat approaches 0:47, there’s an uplift in the tempo, yet Burna Boy maintains this coolness and switches to singing in English. The transition is wondrous.

What will grab everyone’s attention is when he enters the local groove. At 1:33. Crooning with a husky voice in Yoruba,

The call and response technique is so beautiful.

The fact that he could be able to blend in three languages and settle in an atmosphere and genre alien to him certifies him as a versatile act.

Even Master KG, owner of the track was stunned.

“He brings the Nigerian flavour, gimmicks, pidgin English and a different approach to music. He had the Nigerian groove that we mix with South African style while we keep the originality of the song intact.”

It could be Recalled that After the wide success of his 2018 Mega hit – ‘Skeleton Move‘, Master KG returns with another big Banger tagged “Jerusalema”. with an assist from Nomcebo.On this smash hit “Jerusalema” he features the multitalented vocalist Nomcebo Zikode who is better known for blessing sweet vocals on Emazulwini and Imizamo Yami.

Opinion : What was your first impression when you listened to Jerusalemma remix?

Let’s  know your opinions in the comment section below.