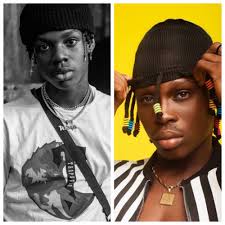 Let’s take for instance,on the 30th of April 2013,Wizkid left EME boys to set his own record label, but since then EME unfortunately hasn’t got a better replacement for him.

Adekunle Gold left Ybnl in 2016 after he dropped his debut album which he titled GOLD it was a hit and a banger, but in 2018 Another signee was signed to Ybnl Adedamola Adefolahan popularly known as Fireboy, the boy really has a fire in him, his voice was made up of gold, he sings afropop blend with soul, in 2019 he dropped his album titled Laughter, Tears and Goosebumps, a great achievement for Fireboy.

On December 7 2018 mavin record’s artist and backbone Reekado Banks also left his dear label to set his own banks record, he worked very hard and had a lot of hit bangers that earned him a next rated artist award which he won over Lilkesh.

On the 22nd of March 2019 Mavins record unveil his another artist DIVINE IKUBO popularly known as Rema.
He is such an amazing boy with a very much talent, many said he sounds like Wizkid, his hardworking earned him a next rated award which he was nominated with the likes of ZlatanIbile, Fireboy, Joeboy and many more, he has a recognition inside Nigeria and outside our nation. He dropped his third EP album in 2019 titled BAD COMMANDO. What A hardworking Rema.

Donbase Media would like to hear from you, do you think Fireboy and Rema are good replacement for Adekunle Gold and Reekado Banks.

We love you all.