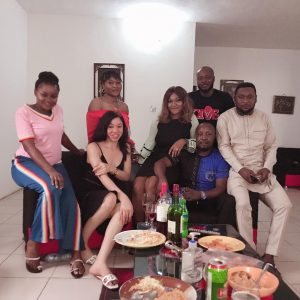 The Chief Executive Officer of Aso Multimedia Agency, Organizer of popular National beauty pageant contest called Queen of Aso Nigeria, Amb. Desmond Agboola, has finally reacted to the huge anticipations and requests from many, including family members, friends and colleagues across the industry.

Few Hours ago and at a launch reception in his Abuja resident, Mr. Desmond Agboola shocked everyone, when he went on his kneels and asked his Fiancée to marry him. Everyone at the reception was dazed and amazed as he proposed to his beautiful and delectable fiancée, Ms Concilla Ugoh

Agboola immediately offered an engagement ring to her, which she received by stretching out her arms. Friends and colleagues who were at the reception were amazed as they threw words of congratulations to the soon-to-be couple. According to our source, Mr. Agboola was noticed to be excited and filled with loads of joy. His fiancée on the other hand was overwhelmed, it was an experience like never before.

Speaking with our AbujaPress few hours later, Agboola described his engagement with Concilla, an Enterpreneur and graduate from the University of Calabar as timely. He stated that Concilla was indeed the breathe of his heart and a completion of his incompleteness. He further stated that, Concilla has been a friend and a motivation to him, stressing that, he felt more fulfilled with the decision and step he took.