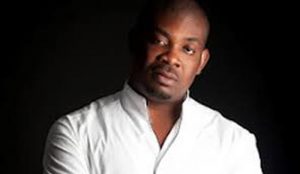 Don Jazzy has surprised many when he claimed he doesn’t know whether he has broken someone’s hearts before in a recent video.

He posted a video of himself playing a game telling his fans what he does and doesn’t do personally and things he has done before.

When it got to a question where he was asked whether he has broken someone’s heart before, the Mavin Records boss claimed he doesn’t know.

From his facial expression, one could say he was guilty as he has broken someone’s heart before but just didn’t want to say.

His fans and followers on Instagram while reacting to it claimed they believe he knows as he just didn’t want to mention the person’s name.