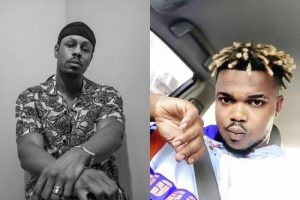 Mavin artist and rapper, Ladipoe accepted a challenge to rap to Rexxie’s ‘Opor”.

Ladipoe was challenged by a friend who told him if he could rap to the beat, he would be given one million bitcoin.

Ladipoe accepted the challenge and dropped the video of his freestyle to the song. “Opor” is a song off Rexxie’s Afroseries EP and features Zlatan.