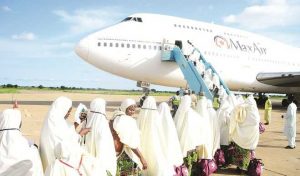 The National Hajj Commission of Nigeria (NAHCON) has scheduled the end of July for the commencement of registration of intending pilgrims for the 2021 exercise.

The new date follows the ban on international pilgrimages and the performance of Hajj this year as a result;lt of the COVID-19 outbreak.

The Kingdom of Saudi Arabia last week announced that due to the ravaging COVID-19 pandemic, only a “very limited number” of people will be allowed to perform the annual Hajj pilgrimage.

The holy pilgrimage, which is one of the five pillars of Islam, traditionally draws over two million Muslim pilgrims from around the world to Saudi Arabia annually.

The NAHCON decision on the commencement of registration for next year’s Hajj was revealed by the Executive Secretary, Bauchi State Muslim Pilgrims Welfare Board, Alhaji Abubakar Babangida Tafida, at a press briefing in Bauchi on the Saudi’s decision on the 2020 Hajj exercise.

According to Tafida, the early commencement of registration for the 2021 exercise is to enable the state pilgrims welfare boards and NAHCON to conclude necessary arrangements for a hitch-free 2021 Hajj operation in time.

The Executive Secretary stated that the 2021 Hajj operation will be highly competitive, adding that the board will apply the principle of first come first serve in distributing Hajj slots to intending pilgrims from the state.

Meanwhile, Tafida has admonished those who had made deposits for this year’s Hajj but are not allowed by the Saudi’s decision to perform the spiritual rite to accept it as an act of Allah.

Alhaji Tafida, however, declared that any of them who want to collect their deposits from the board are at liberty to do so at any time they wish.

According to him, those who wish to collect their deposits should apply to the board for the release of the deposit.

He then called on Muslim faithful to pray against the COVID-19 pandemic and for a successful Hajj exercise next year.