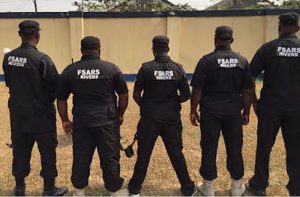 The Ogun State Police command has confirmed the arrest of three members of an armed robbery syndicate.

Police said the suspect were those who had earlier escaped arrest when operatives of Special Anti-Robbery Squad (SARS) stormed their hideout at Adesan area of Mowe.

According to the Ogun State Police Public Relations Officer, Abimbola Oyeyemi, the suspects, Saheed Bello, the leader of the gang; and Sadiq Bello, were traced to Academy area of Ibadan, based on intelligence investigation embarked upon by CSP Tijani Mohammed-led SARS operatives, adding that they were promptly apprehended.

Their arrest, Donbase learnt, led the police to the residence of one Ibrahim Rasheed, who is the gang’s herbalist, at Ile-Ogbo in Osun State.