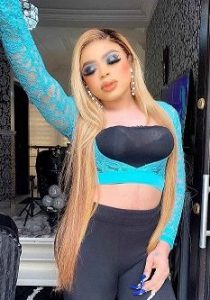 Nigerian cross-dresser, Bobrisky took to his Instagram page to stun everyone as the celebrity flaunted his Bosoms on social media and this immediately sent some surprises to his followers’ camps.

If you will recall, the cross-dresser celebrity whose real name is Idris Okuneye, Olorunwaje, recently attended his father’s birthday dressed as a man, without any female accessories. This debunked the rumours that went viral at a time that he had undergone gender-change surgery.

Well, Bobrisky shared a new photo of himself with what appears like a real pair of Bosoms when zoomed in and his followers have been debating on the cross-dresser’s real sexuality.

Nigerians have however taken to social media to react to the photo as many are confused as to how he manages to do it. While some believe it’s real, others insist it’s fake.

See some of the reactions that followed the photos surfaced

Nope, they are not, if not where did they go the day, she went to celebrate her dad’s birthday? Abi she ties wraparound wrapper on top them?”

If it does, where was it during this father’s birthday?”