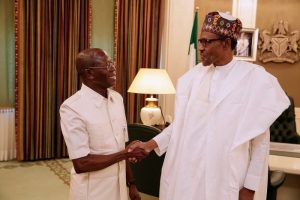 Adams Oshiomhole, immediate past National Chairman of the All Progressives Congress, APC, has revealed that President Muhammadu Buhari personally invited him to head the party two years ago.

Oshiomhole said Buhari asked him to head APC in a bid to reform the party and turn its fortune around.

He disclosed that the president had told him APC will lose the 2019 election if the party was not reformed.

Speaking at a press conference in Abuja yesterday, the immediate past APC National Chairman insisted that he did his best while in office.

The former Edo State governor also disclosed that the president mobilized support for his emergence as APC National Chairman.