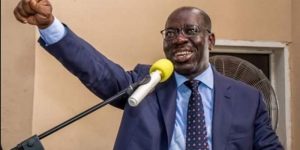 Obaseki said he and his deputy are grateful to the PDP for offering them the umbrella when the All Progressives Congress (APC) threw them in the rain and pledged to be a true party man.

He noted that the level of response to issues in the PDP drives processes fast and assured the national working committee of the PDP that he will work with them to lead Edo rightly.

“I and my deputy are very grateful to this great party. Like I said, you will never know what God has destined for you. In our hours of tribulation, when we were pushed out in the rains and storm from our political party, you came out with that huge umbrella to give us cover and shelter.

“I must thank members of the National Working Committee, the quality of governance, the quality of response that I have witnessed, that have enabled us achieve much in less than one week because of the responsiveness of the national organising secretary. They followed up on every issue and every document. When issues came up, the National Legal adviser was there to respond to all our inquiries. The National Publicity Secretary checked on us every day.